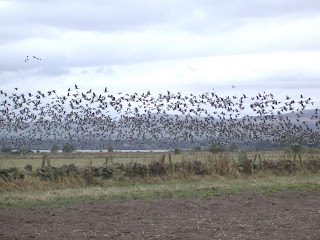 A weekend of contrast as I re-visited the Norfolk coast, a place that has special memories for me and where I lived and worked for several years after leaving home as a young man in the mid 70's.

RSPB Snettisham - We arrived in the early afternoon in gale force winds and horizontal rain, to be honest it would have been quite easy to have abandoned the visit all together and head straight for the comfort of the hotel bar! Notwithstanding, the wife and I donned our wets and headed in.

During the battling 1.5km walk to the first of 4 hides we'd had several Goldeneye and Little Grebe plus Curlew, Black-Tailed Godwit, Grey and Golden Plover, Rock Pipit and good numbers of Redshank, Dunlin and Shelduck on the mudflats. However, one of two reasons for visiting this particular sight was to see the spectacular views of thousands of Knot as they push ever closer following the tide inland. We were not disappointed with some excellent flocks on show, increasing in numbers as the tide drew ever closer.

On arrival at the first hide, where you have the choice to view either the mudflats or lagoons, we settled for a well earned breather. The lagoon produced some excellent numbers of Wigeon, at least 1000+, and upon inspection also yielded Little Egret, battling away in the wind and small numbers of Gadwall and Teal.

After completing the tour of the other hides, which produced nothing more on the species count other than a lone Hare, which bolted across the sea wall, we settled back in the now crowded first hide to witness the main event. Vast numbers, up to 40,000 on occasions, of Pink-Footed Geese, which roost each night on the mudflats and then fly back inland at dawn to feast on the remains of the sugar beet harvest. As we watched in awe, surveying the tide mark in the murk, we also had around 12 Pintail, distinguished by their white breasts against the darkness and gloom, but it wasn't until returning to the car, as the final light dissipated, that we were truly treated to this spectacle as the sky turned black with yet more Pink-Footed!!
Posted by boatbirder at 22:48