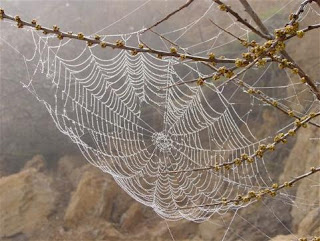 I arrived at Brandon yesterday morning (Thursday 12th) around a half hour before sunrise on a beautiful autumnal morning.
Heavy rain overnight had given way to clear skies and the mist was rising off the Newlands reedbed as the sun poked it's head over the horizon. As I approached the reeds, emerging from New Hare Covert, I knew there was another reason for liking mornings like this, cobwebs! Not the obvious fact that lies within their beauty but the fact that I can actually see them. At 6'4" even when I try to walk behind other, shall we say, smaller chaps in the early morning, I always end up with several face fulls as the spiders weave their webs from one side of the path to the other!

Although today produced nothing out of the norm on the pools, (Tuesday I had Dunlin & Redshank on East Marsh), I have to say that I can't remember another time were I had so many smaller birds and such frenzied activity. Me thinks the natural food supply is beginning to run low?

From my vantage point over Newlands quite a number of mixed flocks containing Goldfinch, Siskin and Lesser Redpoll, plus the usual Tit flocks which contained Long Tail, Great and Blue, always worth more investigation as occasionally I find they produce Goldcrest, Willow or Coal Tit within. At one time the remaining 200 or so Starling from our roost flew East, probably from the West Marsh reedbed, and finally some further good numbers of Redwing, mingled with Fieldfare and the occasional tweet of Skylark.

After our work had been completed for the day, (Thursday is work party day), a large flock of around 150 Greylag came over the reserve as we made our way back to the Nature Centre for tea, too distant from my vantage point to check for other species within. Also today, as I reviewed JW's Website, another siting of Bittern.
Posted by boatbirder at 08:51