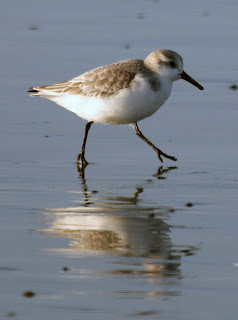 As we left the comfort of the hotel after a hearty breakfast the weather had vastly improved from yesterdays storm.
Our first stop this morning was Wolferton Triangle to try for the infamous Golden Pheasant, and as luck would have it the possibility of Great Grey Shrike, currently reported at Dersingham Bog.

The best strategy for seeing the Golden Pheasant apparently is to sit quietly in your car and wait for the birds to cross one of the two minor roads which form the 'triangle', dawn or dusk are the best times but unfortunately we were a little late. We decided after a short and uneventful period to abandon car and head into the bog.

The reserve comprises of three distinct habitats, mire, heath and woodland. The wet acid peat of the mire is characterised by rare plants, including Bog Asphodel, Round-Leaved Sundew, Cranberry and White-Beaked Sedge. Rare insects thrive here too, including dragonflies such as the Black Darter, and moths such as the Light Knot Grass, of course Winter is not the best time to visit.

The woodland at Dersingham is quite recent and contains Scots Pine, Oak, Sweet Chestnut, Sycamore and Birch. The woodland glades attract birds such as Redpoll, Crossbill, Long-Eared Owl and Sparrowhawk but despite a pleasant walk the best we could come up with were Stonechat, Kestrel and Redpoll, no sign either of Great Grey Shrike, however a local birder did tell us that he'd had it from a distance a little earlier and he believed it was a wintering bird which was here last year.

We progressed further up the coast on what was now a beautiful day weather wise and arrived at RSPB Tichwell. Amazingly this was our first visit to this reserve and so we spent the remainder of the day on site exploring. We decided to take the walk from the visitor centre down to the beach, taking in the Island Hide enroute. The hide itself produces excellent views of the freshwater marsh and reedbed where we had good numbers of Pintail, Wigeon and Brent Geese, plus Redshank, Greenshank, Grey Plover, large flocks of Golden Plover, Avocet, Snipe and around 12 Ruff.

On the walk down to the beach overlooking the marshes we watched 2 Hen Harrier, one being a ring-tailed, plus Marsh Harrier overhead and had Cettis Warbler, Skylark, Meadow Pipit and several Little Egret. At the beach itself we had a nice stroll along the coastline with Sanderling, Black-Tailed Godwit, Oystercatcher, Grey Plover, Dunlin and a small flock of Snow Bunting flew low over the sand. At sea we picked up good numbers of Goldeneye plus 1 Red Throated Diver, 6 Common Scoter in flight and a single Common Eider. A thoroughly enjoyable first visit.

Amazingly on the drive home we passed Wolferton once more and to our delight, there at the side of the road, we picked up a fleeting glimpse of a Golden Pheasant as it disappeared into the undergrowth, a terrific end to a diverse weekend!!

(Pictured above - Sanderling, one of Dee's favourite birds)