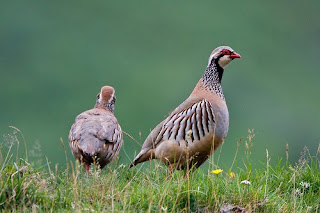 Three visits to Brandon Marsh this week which included two unexpected firsts for my Brandon list!

On my first visit of the week, Tuesday 17th, I was delighted to get my second sighting of Bittern for this Autumn. As I approached the Olive Bench near Newlands a single bird rose from the middle of the reedbed at around 7.36am and flew around 100 yards, dropping down at the rear of the Sand Martin structure, strangely enough roughly in the same spot I had it last week. It's always nice to add to your site species list and during a quick sortie across towards the Farm Area after lunch, with other members of the 'Tuesday Club', no less than 5 Red Legged Partridge (pictured) flew out from within Farm Pool Reedbed, it turns out the first sighting of this species on the reserve since 2004, and a first for me at Brandon.

For Thursdays visit I decided to arrive before dawn in the hope of tracking down a Barn Owl or two and began my search at Sheepfield at around 6.30am. After a fruitless 30 minute observation in one of my favourite spots I was preparing to move on when a single bird came through from the East, disappearing quickly into the wooded area near the concrete plant. Not the best view I've ever had but a Barn Owl nonetheless and always a pleasure to see. A quick trip back to the Big Hide at around 3pm, after the other work party members had departed, resulted in my second addition to my Brandon site list, this time in the form of a single Yellow Legged Gull. In amongst a dozen or so Common Gull but easily identifiable by a distinct red ring around the eye. The bird stayed for around 20 minutes.

On to this mornings visit , Saturday 21st, and on the look out for Great White Egret, a single bird being reported on site yesterday. After a good scan of Newlands at dawn I came up with a blank and decided to head for Big Hide and coffee. The reed area in front and to the left of Big Hide has had a section strategically cut out by the team, affectionately known to us as the 'Elephant Ride'. The area has now flooded nicely and has been cut with the intention of exposing Water Rail and Bittern as they move through the reed. Today I was delighted to observe 2 Water Rail feeding in this area, one species which I believe has had an exceptional breeding year at the reserve and is an accolade to Brandon.

Another bird which Brandon should be proud of is the wintering Bittern, or indeed Bitterns, and today I had yet another sighting of this magnificent bird as one flew high across East Marsh Pool at around 9am, fortunately observed by several other delighted birders. A Full-English in the Nature Centre around 1pm ended an excellent morning and I've since had word that the Great White Egret did in fact reappear at 2pm, well done to George for his Pictures.
Posted by boatbirder at 16:12