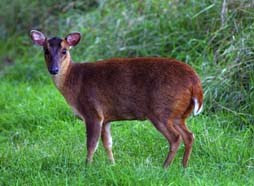 Out and about with my better half today we decided to have a late afternoon visit to the Brandon hides, after a coffee and snack at the Nature Centre.

The wife, who's more expert with mammals than birds, had never seen a Water Rail close up so the plan was to pop into the Big Hide where they are regularly seen in the nearby reeds. After a half hour vigil, with no Rails, we were delighted to observe a male and female Muntjac Deer on the bank opposite, which I have to say looked in fantastic condition in the late evening sun.

We moved on to the Carlton Hide, still with high hopes of Water Rail, and settled in for a final stint. Not a bad evening, the wind finally dropping and good light from the now partially clouded sky. Our first bird of note was a female Sparrowhawk which perched nicely on one of the dead trees to the left, probably in anticipation of an evening snack from one of the few Starlings now beginning to appear. She did try, but unsuccessfully!

Dee was delighted a short time later when a Barn Owl appeared from the box on the far side of Newlands and settled on the trees close by, ready for an evenings hunt. However, the highlight of the visit was the appearance of a Bittern, which flew right to left at the back of the Newlands Reedbed and settled just behind big dead tree. "Oh was that the Bittern" says the wife, "yes" says me "Ah, I spotted him earlier flying the other way but didn't want to disturb you while you were talking to those other guys!" I do love that girl, so polite!!!
Posted by boatbirder at 19:06