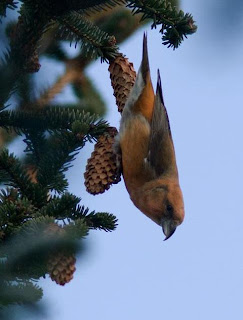 As we all wait in anticipation at Brandon for our spring arrivals I arranged an away day today for a dozen members of the Brandon Team with a trip to the Forest Of Dean, Herefordshire.

After an 8am departure from the reserve we arrived 2 hours later at the observation point at New Fancy Lane, where we'd hope to connect with the famous Goshawks. The viewpoint was quite busy today as another dozen or so RSPB members from Weston-Super-Mare local branch had also arrived. After a good hours observation with Raven, Buzzard and reasonable views of Crossbill, we eventually had distant views of Goshawk. If I'm being honest I had hoped to get better views of one of my favourite raptors, but as the guys who'd been here before told me, 'this is as good as it gets', well a Goshawk is a Goshawk in my book so I guess mission accomplished.

Next on the agenda was a visit to Speech House Woodland where Hawfinch have been seen recently, another one of those species which has been elusive to me over recent years. Unfortunately we bombed out on this attempt after a half hour search, much to my disappointment. However, on an ajacent field I don't think I've seen as many Thrush in one area at one time with Redwing, Song Thrush and Mistle Thrush, I stopped counting Song Thrush at 17 and Mistle Thrush at 5, they were simply everywhere.

For lunch we arrived at Cannop Pond, where things took a real turn for the better on the species front. First was a good number of male and female Mandarin with Little Grebe also observed, and then a real surprise as 3 Sand Martin suddenly appeared over the pond, our first sighting this year. Another bird registered today, and one which has also eluded me for the last year, was Marsh Tit, and it was great to see one once again after all this time. During lunch our species count continued to grow with more Crossbill, Siskin, Grey Wagtail, Goldcrest, Treecreeper and endless amounts of Nuthatch.

After lunch a final attempt on the trail of Hawfinch, this time a trip to Parkend Church and once again another vigil, and another failure. However, this time at least we were rewarded with close-up views of a pair of Crossbill (male pictured above) . A trip to Symonds Yat quickly followed in search of Peregrine which nest each year in the limestone cliffs, but after a 30 minute observation this also disappointingly failed to deliver. Mind you, you simply cannot fail to be impressed by the astonishing panarama which meets you from the viewpoint, and despite the Peregrine no show the views were certainly spectacular and well worth the visit!

Our final destination on our way back home for those travelling in my car was Upton Warren, just off junction 5 of the M5 motorway, a Worcestershire Wildlife Trust nature reserve. Here the highlights were 4 Avocet, 4 Curlew, 1 Little Egret, 1 Oystercatcher and 3 Shelduck. The whole day, despite a couple of no shows on the hit list was a fantastic day out.
Posted by boatbirder at 19:43