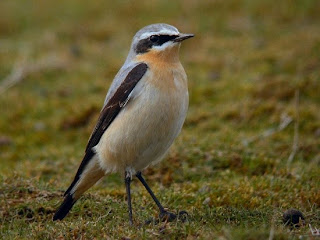 Well I thought it might be the weekend before I'd be posting the first sighting of Willow Warbler at Brandon Marsh, but I'm delighted to say I was wrong. The bird was seen singing, strangely enough in almost the exact same area as the first Chiffchaff, near the Saga sign which overlooks Goose Pool earlier this morning. I also had my first Swallow at Brandon today too, having missed the one that JR recorded on Tuesday afternoon. Sand Martins were also well in evidence this morning with around 50 birds over East Marsh and Grebe Pools. During my work on Phase 3 I also had a second Willow Wartbler calling and Brimstone Butterfly.

After further phase 3 reed bed work had finished at around 1.30pm word came through of 2 Wheatear at Baginton Airport near the fuel tanks, and so off we trundled after tea to take a look. The area is well known to the Brandon team who in recent years have had Redstart and Whinchat, unfortunately before my time! Upon arrival and after a quick scan of the immediate area PB picked up 2 Curlew on the open field, and shortly after we located one of the Wheatear (library pictured) perched on a concrete post, I must say looking in excellent plumage. It's probably my earliest ever Wheatear but I'd have to check that one. After a further scan we were unable to pick up on the second bird.
Another area we checked not far from the airport was a flooded field were JR regularly sees Green Sandpiper and so we went to investigate. Having risked near death as the passing cars whizzed by within inches thinking, who the hell are these idiots, I managed 6 birds in total (JR had 7) in an area where you'd probably just drive by. Just goes to show it pays to be vigilant in this birding lark, (no pun intended).
Posted by boatbirder at 16:58