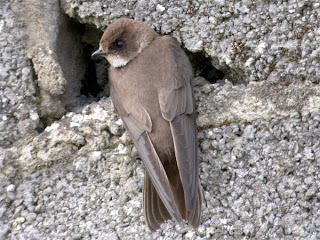 Well spring has certainly sprung to life for me today at Brandon Marsh with a hatrick of early migrants. Firstly, as I drove down the road towards the nature centre at around 7am a Sand Martin came skimming across the top reed bed before heading off west, a very pleasant start to the day and unless an earlier report arrives to the recorder, the first at Brandon this year.

Secondly, after parking up and heading off down towards Sheep Field a half hour later I heard my first singing Chiffchaff close to the fisherman's noticeboard near Grebe Pool. Although I didn't pick him up visually at the time I did have a Chiffchaff later in the day around the same area and assume it's the same bird. A second bird of the day was also observed drinking at the Carlton Hide by myself and several others. 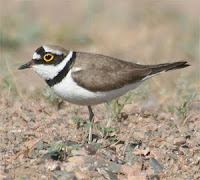 My hatrick came after the work party had ended and a final walk around the reserve with Derek Bennett. At around 3.30pm 2 Little Ringed Plover dropped in on Tern Island, East Marsh Pool, but unfortunately after identification only stayed briefly before heading off in the direction of the airport.

Also on site today of note were : - 1 Willow Tit, the first I've seen at Brandon for several months and a species I believe suffered in the cold winter, 4 Shelduck, 2 Redshank, circa 20 Redpoll, 1 Goldcrest and a count of 30 Snipe this afternoon before departing. We also had the pleasure of a Weasel on the path leading from the Wright Hide earlier on and 2 Stoats were seen today by other members of the conservation team around the Olive Wood Seat.

** All above photographs are library pictures)
Posted by boatbirder at 17:37