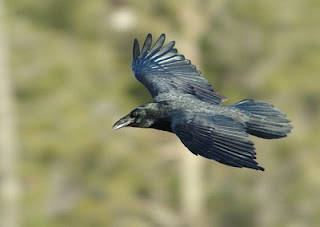 A quick trip to Brandon Marsh yesterday afternoon produced the now regular Goldcrest in New Hare Covert, female Muntjac on Wigeon Bank and a lone Raven flying east (pictured) over the Carlton Hide, easily identified by the Cronk! Cronk! while in flight.

With the sluices currently open on East Marsh Pool and little rain recently the Islands are once again starting to appear in full, with the Flag Iris near the centre of the pool also beginning to re-emerge. The water levels are reduced during the spring and summer to allow birds such as Lapwing, Little Ringed Plover and Oystercatcher to breed without the risk of flood and of course to entice migrating Waders.

Also worth a mention to anyone visiting this week that Thursday will not be a good time as the Conservation Team will be out and about on East Marsh. We will be preparing the now successful Sand Martin structure for the birds imminent arrival (birds have already been reported In Wiltshire and Dorset) and also refurbishing the Islands in preparation for the forthcoming breeding season. We also plan to build a Shelduck nesting hole, 2 birds are currently on site and have been for a while, so you never know.

The best of the day though for me was at sunset back at the marina were I had a perfect opportunity to observe no less than 3 Little Owl. I've been hearing these birds calling for a good while now and actually identified their roost a few days ago. While replenishing my water tanks I suddenly noticed a single bird silhouetted against the remains of the beautiful sunset, and the subsequent stunning blood red sky, so went to investigate. I spent a superb 30 minutes watching the birds, not sure if displaying or playing, as they called across the marina, occasionally goading each other from adjacent trees, one then decided to dive bomb the other before departing into the darkness, what a treat!
Posted by boatbirder at 09:14