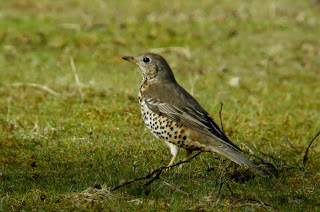 A couple of chilly visits to Brandon over the weekend and if my dashboard temperature indicator is not malfunctioning it was an astonishing -9C when I left the marina at 5.30am this morning.
Saturdays visit was topped off with the Bittern showing briefly in the gap at East Marsh Hide at around 9am, but this morning I left a little earlier with the specific intention of checking out Sheep Field for Barn Owls. I actually think I arrived a little too late as when I finally reached my observation area the dawn was already well advanced. After a 30 minute vigil, which only produced a lone Buzzard heading East, I decided to go in search of the hopefully imminent Lesser Spotted Woodpecker. Two birds were on site at this time last year, but thus far no reports have been forthcoming.
I spent around 40 minutes in New Hare Covert where I had no less than 5 drumming Woodpeckers, all of which turned out to be Great Spotted. A very enjoyable 40 minutes though I must say with 2 Coal Tits amongst the many Great and Blue, and as I left for East Marsh Pool the sun was already hitting the canopy, one of my favourite sights at Brandon when the sky is a crystal clear blue.
On arrival at the Wright Hide 4 Oystercatcher were on one of the back Islands, 2 of which departed almost immediately, and 2 Ringed Plover, which looked frozen solid, were on Tern Island. The 2 Shelduck, male and female, are also still around on the pool, and a smaller than usual count of 5 Snipe. I should also mention 1 Barnacle Goose and a lone Little Grebe on Swallow Pool as I made my way past. No sign of a Bittern for me today, although a couple of the team had one at the back of River Pool mid-morning. A visit to the frozen West Marsh had Sparrowhawk, plus a male Muntjac on the bank just prior to entering the hide.
After the Conservation Team meeting finished at midday a quick tour around the west of the reserve produced an amazing 6 Buzzard on a thermal over Central Marsh, and a good looking Mistle Thrush (pictured) on Farm Field. As for my target birds of Barn Owl and Lesser Spotted Woodpecker, no joy I'm afraid.
On a final note, thank you for the emails regarding my new Brandon Map, all very possitive I must say and a special thanks to Graham Rowling who pointed out that I had the River Avon running the wrong way! All fixed now Graham.
Posted by boatbirder at 20:24