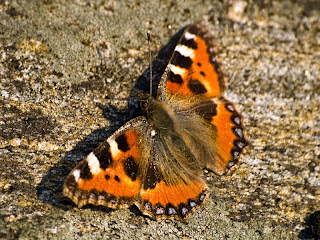 Finally nature is beginning to unlock after the coldest winter since 1981 and there are definite signs with bumblebees and butterflies taking to the skies. Last Sunday at Brandon I came across a Small Tortoiseshell butterfly (pictured) basking in the sunshine on River Meadow before flying off, the Coltsfoot, Primrose and Daffodils are also finally breaking through. I have no doubt too that I heard the calls of a Lesser Spotted Woodpecker near Horstail Glade in the fog of the early morning, another Brandon spring visitor.

On Monday I stayed local and went in search of a Firecrest that had been reported at Napton on Sunday, only 5 minutes from my location, unfortunately after a 90 minute search I came up with a blank. I did manage a lone Goldcrest, 4 Buzzard and around 25 Fieldfare though and also met up with Denis Woodward another birder joining the search who'd come across from Coventry.

After Thursday's arrival of the first Chiffchaff's you'd be hard pushed now to avoid hearing one anywhere on the reserve, I recorded 8 today in various locations all competing for territory. The first Swallow of the year was also sighted by JR from the Wright Hide this afternoon and I myself had a count of 7 more Sand Martin. As one species arrives another prepares to depart and it was great to see a solitary Bittern showing well on Teal Pool Bund early this morning after an absence of 10 days, a bird which is probably ready to depart any time now.

When I first arrived at Brandon this morning things were particularly quiet with the numbers of Shoveler and Teal now starting to diminish along with the reducing Black Headed Gull numbers. After the Bittern sighting early on things did pick up with a single Little Ringed Plover, 2 Ringed Plover, 2 Oystercatcher now on station, 4 Redshank and a brief visit from a Grey Wagtail. I've also discovered Long Tailed Tit and Blue Tit nests and I'm positive I now know the location of a Kingfisher nest, with 2 birds showing well near the location. Touring the reserve today there are still reasonable numbers of Redpoll on site plus the odd Fieldfare and Redwing and another amazing sight today was 9 Buzzards in the morning sunshine high over the top reed bed. The next bird on the spring hit list is Willow Warbler and I'm positive I'll be reporting on this species within the next seven days.
Posted by boatbirder at 21:10