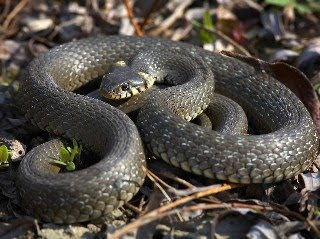 Thursday 6th May :
On a chilly Thursday at Brandon we managed Grasshopper Warbler on Newlands early on, and starting work at around 9.30am we were able to complete further work on the Baldwin Hide willow screens. During a check of one of my 'rufugia' a Grass Snake was found basking, somewhere in the region of about 18inches in size, and probably a male due to the swellings in the vent. The bird of the day for me was a Peregrine Falcon, which I caught site of high up whizzing across East Marsh Pool in search of Hirundines.
Saturday 8th May :
This morning at Brandon, with winter making an unexpected return to the UK, I was fully prepared having rooted my thermals back out of the wardrobe.
Last nights reported Wood Sandpiper on East Marsh Pool was nowhere to be found when I arrived at around 6.45am, but a lull in the rain allowed me to have a good look around Sheep Field and New Hare Covert. No sign of Lesser Whitethroat once again but the usual Warblers were in good song, even in the face of a rather nasty northerly breeze, and a Goldcrest was calling too when I passed through the Covert.

A Cuckoo calling in the big dead tree at Carlton Pool but the Teal Hide probably produced the best of the day with 2 Hobby, firstly skimming the top of the hide, and then settling briefly in one of the dead trees before making off again. During coffee in the Big Hide a pair of Shelduck, which we'd noticed flying over while watching the Hobbies, landed for a brief stay before flying East. 4 Common Tern were on the South raft and a lone Snipe was also on Willow Island, plus the usual good numbers of Little Ringed Plover (5), 2 Ringed Plover, 2 Redshank and 4 Oystercatcher. I was also pleased to see that the Oystercatcher chicks, which first appeared on Thursday, now number 3 and were being treated regularly with worms by the hard working male. A Yellow Wagtail was also observed on Willow Island before I arrived.
Posted by boatbirder at 13:38