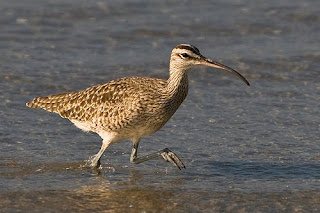 Back at Brandon Marsh this weekend with visits Saturday and Sunday in temperatures on a par to what I've been used to in Spain this last week. Having only been gone seven days it's amazing even in that short time how things have moved on. The Bluebells in New Hare Covert are in full bloom, the flowering Primrose that graced Central Marsh have now diminished and various Butterfly species such a Common Blue, Holly Blue and Speckled Wood are showing in good numbers.
On Saturday morning I caught up with what I'd missed first hand, having been kept well in touch by Jim Rushforth via text while I was away. During my short break I'd missed out on Garganey, Sanderling and the even rarer Temminck's Stint, a bird that I haven't personally seen at Brandon in the 18 months I've been part of the team.
However, I did record a first for Brandon in 2010 with a Spotted Flycatcher up high in one of the dead trees in New Hare Covert early on Saturday morning. They do exactly what it says on the tin, with the bird perched on the topmost branch catching flies! More signs too of Otter Spraint on my travels, and indeed a couple of visual reports from a few other regulars to Brandon. My glorious Saturday morning ended with a walk across the Top Pool Reedbed and a lovely male Stonechat perched on one of the fences by the old farm buildings, not a bad return home to my favourite place.
I arrived a little later on Sunday morning with a clear blue sky and the sun well up even at 7am. As I took a very leisurely stroll on my usual route a phone call put me on to a Whimbrel that had just arrived on East Marsh Pool, within 5-minutes I had the bird in my scope in Wright Hide. I was astonished to find too, having checked my records back home, that this is the first Whimbrel I've had at Brandon. I was sad to here that the 3 Oystercatcher chicks which were progressing well before my holiday did not survive, probably the Crows once again, and there now only appears to be 1 Great Crested Grebe chick, having seen 2 before my holiday.
Nothing more to report on Sunday until around 9am when Norman Sills, the manager, and in fact designer of RSPB Lakenheath, and Brandon too for that matter, joined us in the Big Hide. Norman appeared in the doorway stating 'I've never seen a Red Kite at Brandon before' which sent us scurrying outside to find said Red Kite high up in the blue heading East. Quite an eventful return after my holiday and I feel that I'm already back into the swing of things.
(Above - Whimbrel library picture)
Posted by boatbirder at 08:45