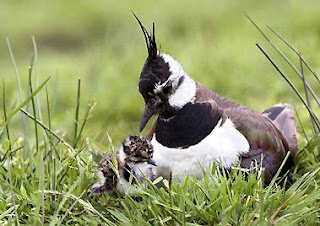 Quite a slow start to May for me on the birding front, especially after such a fantastic April, but with a few business commitments in London now out of the way, I look forward to spending more time in the field, particularly at Brandon. Plus I also have my trip to Costa Del La Luz, Spain to look forward to next week.
On Tuesday I managed a full days birding at Brandon Marsh, but to be honest with the sharp drop in temperature, hard frost early on and the wind backing North, I didn't really expect too much. With all the regular summer species now on site I'm on the look out for the more unusual visitors, and of course the first young of the year. I'm happy to report that plenty of Goslings are now appearing with both Canada and Greylag in evidence, plus at least 2 broods of Lapwing (pictured) are also on the loose and Moorhen have also been reported, but I personally haven't picked any Moorhen or Coot up as yet. Also imminent are Oystercatcher and Great Crested Grebe which have both been sitting for sometime.
A few concerns currently with the number of Common Tern on site still very low, and only a single Cuckoo from my observations, but it's still a little early for any major worries. However, the numbers of Warbler species is really something to get excited about with plenty of Garden Warbler also arriving recently, and a major influx of Hirundines too, particularly Swift. Our winter visitors have now decreased significantly with very few Shoveler and almost no Teal on site, but there are still a few Snipe to be found, and Gadwall are also in good numbers for the time of year.
Worth noting too that as I post this update I've just received news of 2 male Whinchat reported near the Olive Bench on Newlands.
Posted by boatbirder at 18:36