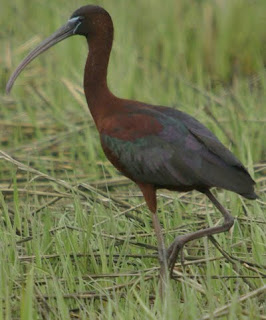 Another 90-minute drive North (Monday 18th) took us back to Donana National Park and the amazing town of El Rocio. Entirely built on sand, including the roads, and resembles something similar to an old cowboy western town, with posts and rails to hitch your horse and the locals riding around on horseback and in buggies.

After our pilgrimage to the town our attention turned to the other reason for being here, the birds. The stream that feeds La Madre de las Marismas is called La Rocina, and it changes its name at Canariega Bridge were after the brief crossing we turned to first visit the Charco de Acebron Path and then back to the four La Rocina hides. However, before leaving the town a drive along the Rocina produced Flamingo, excellent numbers of Spoonbill feeding in the shallows, Glossy Ibis (pictured), Purple and Grey Heron plus Gull-billed and Whiskered Tern.

The Acebron Path runs for about 1.5km and consists of Willow, Cork Oak and Umbrella Pine forest with Alder Buckthorns, Honeysuckle and Wild Grape Vines intermingled; the ground is awash with various Ferns. On arrival Hoopoe were in evidence and having completed some research on Iberian Chiffchaff recently I was delighted to hear one calling quite close up. The familiar call of several Cetti’s Warbler followed by the unmistakable Nightingale, which were numerous during our visit. Firecrest and Serin were also here and so too Chaffinch, Greenfinch, Goldfinch, Willow Warbler, Cuckoo and Great Spotted Woodpecker.

After Acebron we took the drive back to the Lodge and parked up for a tour of the four hides that overlook La Rocina. Here we saw the usual Egrets and White Storks along with Red-crested Pochard, more Glossy Ibis and waders such as Black-winged Stilt, Redshank and Common Sandpiper. Birds of Prey included Black and Red Kite, Marsh Harrier and our first Montagu’s Harrier of the visit. During the walks in-between hides were more Woodchat Shrike, seen everywhere so far during our visit, more Bee-eater, Spotted Flycatcher, Whinchat, Stonechat and Redstart. Within the various reed beds were various warblers; Great Reed, Sedge, Savi’s and Melodious, plus a song I’m unfamiliar with and will investigate back home, a really excellent day.

Today a sightseeing visit to Savilla, with some unexpected birding bonus’s, but more on that later as it’s time for dinner!
Posted by boatbirder at 18:38