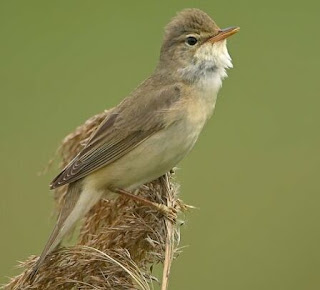 I certainly don't count myself as a twitcher but when something comes up in say a 20 mile radius of my mooring I'm usually there. A phone call, firstly from Denis Woodward and then from Jim Rushforth sent me over to Coome Abbey Country Park for a reported Marsh Warbler (library Picture).

Well done to the Coombe Abbey Ranger who'd marked out a path across two fields which led Jim, my friend Dave who happened to be visiting from Spain, and I straight to the singing bird which was located on Linley Bank, a normally closed area of the park. We arrived and joined in the gathering of fellow birders who listened intently with occasional views as the bird moved from the reed bed to a small willow tree offering a brief glimpse. Having stayed for around 45 minutes listening and watching intently I left the area convinced, like the other birders present, that I'd had a Marsh Warbler. This included Jim Rushforth, who heard the song and saw the bird, and who has first hand experience of previous birds, having actually ringed one some years ago. I suppose I shouldn't have been surprised that later in the evening doubts were already beginning to be cast in relation to the validity of the bird.

What struck me immediately was the sheer varied repertoire of what is for me quite a mysterious Warbler, easily confused with its near relative the Reed Warbler unless singing, and especially so on migration. Tones of Blackbird, Blue Tit and Chaffinch to name but a few came through unmistakably. Is the bird too early as mentioned in the thread? Again I believe there is always an exception to the rule, having located a Sedge Warbler at Brandon on March 27th of this year! A look in the Collins 2nd addition also has the bird arriving Mid April - September in the UK. Having spoken again to Jim, who has now studied the pictures in detail, and of course was there on site with me, I'm still with Marsh Warbler.

The Marsh Warbler for me will remain something of an enigma, but I'm of the opinion that those who doubt it was a genuine bird will have to deliver some compelling evidence to dissuade me from believing it was, particularly those who weren't even there! As I'm not that interested in tick lists or year lists and birding for me is simply the pure enjoyment, I'm not bothered either way, It was just a real pleasure to sit listening to the mimicry of this astonishing little Warbler!
Posted by boatbirder at 19:30