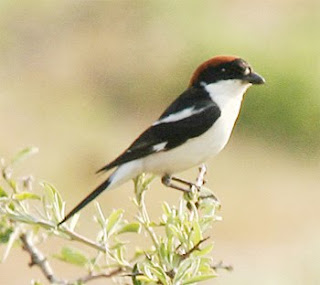 A slightly longer drive than anticipated yesterday arriving at Acebuche, a reserve within the Donana National Park area at around midday. Acebuche (Wild Olive) was built in 1980 in the style of a traditional fortified farmhouse around a courtyard, on the site of the original farmstead that worked the surrounding area. Paths lead from the courtyard to a series of hides that overlook a number of lakes.

As we drove down to the centre the first species we noticed was the incredible sight of several Bee-eaters flying back and forth from the many Umbrella Pine trees. Dee managed to snap a good few photographs from the car window and even managed two birds perched on the same branch. Arriving at the first hide of the day Red Rumped Swallows were plentiful, flying low across the water and several White Stork nests were also visible with a number of young in each.

As we progressed along the very well maintained paths, all built with decking and surrounded by many flowers and Halimium shrub, another species showing in good numbers was Woodchat Shrike (pictured), and by the end of the day our numbers were well into double figures. During our stay I doubt whether we could look skyward without seeing a Black Kite circling, another species that seemed to be in excellent numbers here. One particular bird call, the Golden Oriole, seemed to taunt us on several occasions, and no matter how many times we went to investigate we could not actually get an eyeball on this illusive character, definitely our bogey bird of the day.

As the afternoon wore on we found the various lakes to be pretty quiet and most of our sightings were in or around the open areas of scrub and within the small Umbrella Pine copse. Stonechat, Crested and Thekla Lark, Subalpine Warbler, Spotted Flycatcher, Corn Bunting, and a lone Ortolan Bunting were all recorded. As we approached the furthest hide of the day A Blue Headed Yellow Wagtail and Savi’s Warbler were seen around the small lake and as we made our way back to the centre a Tree Sparrow and Cirl Bunting were also observed. A final look at one of the earlier hides now produced our first Purple Gallinule, along with two young, Red Crested Pochard, Little and Great Crested Grebe, both with young, and the call of yet another Golden Oriole, which of course we didn’t see!

A two hour drive back to our hotel at Isla Canala added a Common Buzzard, Flamingo and a brief stop off at what has now become our local lagoon saw Hen Harrier, Black Winged Stilt, Dunlin, Sanderling, Little Stint and both Cattle and Little Egret.

Today is Dee’s choice for a day out so we intend to stay local with a nice beach walk, followed by lunch at the local marina, but this evening were off in search of Eagles to a well known and local observation point!!!
Posted by boatbirder at 08:16