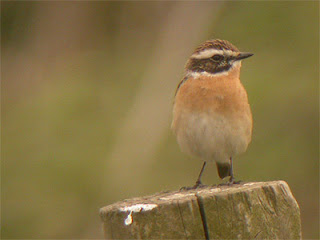 Having travelled into London on business yesterday I was sure glad to be back at the marsh today, and what an excellent days birding it turned out to be.

I arrived at around 9am, rather later than normal, but a nice start as I drove past the coach parking area with a lovely looking male Wheatear on the bund. By the time I arrived at the Wright Hide, meeting Alvin Burton on the way, I'd recorded 3 Lesser Whitethroat and 2 Garden Warbler, plus a calling Goldcrest in New Hare Covert. When I arrived at Wright Hide the 2 Dunlin, which Alvin had mentioned on passing, were on Willow Island looking lovely in summer plumage, along with 5 Little Ringed Plover and 1 Ringed Plover.

My biggest surprise, and what has now become a dilemma for me, is what I believe may be an Iberian Chiffchaff calling from atop a tree just outside the Wright hide! My frustration of this bird revolves around its very odd song and is very similar to this recording. The identification of Iberian Chiffchaff is almost solely based upon the song and call, and despite some extremely subtle plumage and bare-part differences, there is no other certain means by which they can be identified with absolute certainty in the field. Some very subtle differences in plumage and structure can also be noted: a relatively long tail, wing and bill, as well as bright plumage coloration and well-marked supercilium, and having observed this bird for some time, all of the above were noted! So it remains to be seen and I would ask that anyone hearing an odd sounding Chiffchaff to make sure you check it out completely, the jury is still out.

Having moved on, deep in thought, I made my way around to the River Pool Hide to pick up on the 5 Black-tailed Godwit which still remain on site. In the Big Hide, where I remained for an hour perusing the pool, which was literally awash with Swift, Sand Martin, House Martin and Swallow, I also recorded of note 5 Common Tern, 2 Common Sandpiper, 2 Redshank and surprisingly still with us 4 Snipe.

Another Garden Warbler singing on route to the Carton Hide made 3 for the day and a 45 Minute stint within failed to produce the recent Marsh Harrier, which still remains a bogey bird for me at Brandon, the highlight being a male Cuckoo calling from big dead tree.

When I finally drove off the reserve back up to the main car park I decided to have a further look at the male Wheatear, which I'd seen on arrival earlier and was presented with my bird of the day. Sitting on top of a nearby Hawthorn was not only the male Wheatear but a stunning male Whinchat (pictured), my first for the reserve. I immediately put in a call to Jim Rushforth our site recorder, who made straight over. By the time Jim had arrived I'd made a quick dash into the cafe, which was about to close, for a pasty (gotta feed me belly!) and so had lost sight of both birds when we met up! No need to panic though as both birds were re-discovered after a short sortie by us both, much to my delight and to the delight of others I'd managed to contact in the interim, Richard, Dave and Dennis. Phew!!
Posted by boatbirder at 16:17

A warm welcome to Scotland.In October 2020 after 16yrs of living aboard our traditional narrowboat cruising the canals & estuaries of England & Wales we felt the time had come to head back to 'dry land' to our property in the heart of Aberdeenshire. Admittedly it was a sad moment when my wife and I stepped foot off our wonderful floating home for the last time but we have many precious memories to look back on and we're very excited about our move north.I hope you continue to enjoy this journal of our wildlife field trips & travels abroad, so here's to new beginnings and life back on 'Terra Firma'