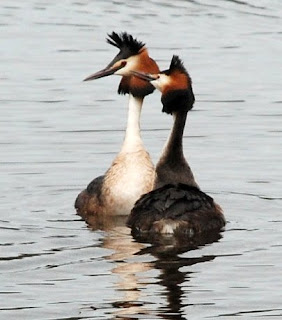 A wet and early start to the day for my usual Tuesday stint at Brandon Marsh, along with other members of the conservation team, Tuesday is our main birding day.
Comparing the recorded sitings from recent years we had a good feeling about today. The same week last year produced the first arrivals of Sand Martin and Chiffchaff and so today all ears were awaiting the melodious chiff, chaff, chiff, chaff of the first bird. As well as recording the usual suspects and listening for our Chiffchaff from the shelter of the main hide, all eyes were also scanning in anticipation of a Sand Martin arrival, one has already been seen at the nearby Draycote Water.
Excellent numbers of Snipe on Willow Island today with a count of 42. A single Pochard is still on site with no Wigeon sitings for a good 10 days and I only managed a count of 4 Gadwall, which were over on Teal Pool. However, there are still good numbers of Shoveler, Teal and Tufted, the later of which will remain all year round. Our regular wintering Bittern hasn't been recorded for several days and I'm beginning to wonder if that's the last we'll see until next winter. Before moving on to the Carlton hide we picked up a pair of Kingfisher, White Fronted Goose, Sparrowhawk, Buzzard, Goldeneye, Shelduck, Water Rail and as well as the usual hoard of Black Headed Gulls, also logged Lesser Black Back, Common and Herring.
Arriving at the Carlton Hide we were greeted by a Green Sandpiper, probably the same one I picked up last Saturday, 2 Little Grebe and yet another Sparrowhawk.
There have been reports over the previous two Sundays of Lesser Spotted Woodpecker activity over on the West Marsh and so moving across for a brief vigil in the designated area, which ended in a blank, we took lunch in the West Marsh Hide. Here we were treated to some excellent views of a 50+ flock of mixed Redpoll/Siskin foraging in the Alder. At one stage one tree contained Long Tailed Tit, Tree Creeper, Redpoll and Siskin! We also had 2 more Buzzard and yet another Sparrowhawk. A really good day for raptors!
We also had an amazing count of no less than 10 Great Crested Grebe across the reserve, they have an elaborate courtship display in which they rise out of the water and shake their heads, we were lucky enough to witness this on several occasions. My final birds of note, apart from the usual Tits and Finches, also included Willow Tit, Goldcrest, Cettis Warbler, Fieldfare, Redwing, Green Woodpecker, Great Spotted Woodpecker and a single Muntjac Deer was seen over on the Farm Field. Oh! You guessed it, no Sand Martins or Chiffchaff were located but all in all a really good days birding.
Posted by boatbirder at 17:34