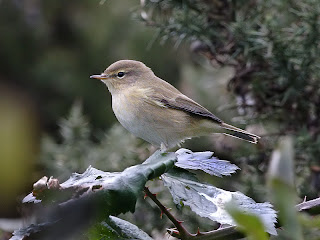 I know I said I was having a few days birding break but when I saw the weather forecast for today I just couldn't resist.

When I arrived at Brandon at dawn the sky was clear and a mist had descended across
Sheepfield, my first stop. I'd actually come early to try and pick up on a Short-Eared Owl, which had been seen on numerous occasions in mid February but not since. I know that Short-Eared also hunt in the day but I also wanted to check out the Barn Owls which are regular here. After an hour's search, no sign of the Short-Eared but I got good views of the Barn Owl and a wonderful sunrise.

My next project of the day was going to be a search for Chiffchaff and Redshank, both of which should be on the reserve by now. I had information that a Chiffchaff had been heard but not seen yesterday, so my search was on in earnest. By 10am I'd completed my usual walk through New Hare Covert and had visited the Wright Hide, unfortunately not picking up anything unusual, although there were excellent numbers of Snipe, 43 in total. I had my morning coffee in the Main Hide and got chatting with a chap called Richard who lives just by Spaghetti Junction (M6), he'd picked up a dozen Waxwing literally outside his bedroom window earlier and was on a high! Chatting for a while longer he also told me that he'd heard a Chiffchaff down by Grebe Pool just after arriving, typical I thought.

My next stop was Carlton Hide, which was very quiet, no sign either of our Bittern, which I'm certain has now departed for the Summer back to Northern Europe, I personally have not had a sighting in over 2 weeks.

Shortly after leaving Carlton I was delighted to pick up my first Chiffchaff (pictured) of the year, who was happily singing away in trees just outside the hide, another Brandon tick for my year-list! By the end of my visit I finished with 3 Chiffchaff in all but still no Redshank. I met up with Richard once again during my visit and we both spent a good while in Horstail Glade searching for the Lesser Spotted Woodpeckers which I'd picked up on Thursday, today without success.
There are also a good few bees around now, one particular Bee I got a good look at in Horsetail was a Pratorum male, a common small species which emerges in early spring. I also picked up an early Peacock butterfly which was enjoying the spring sunshine. Some highlights of my bird count today were:- Great Spotted Woodpecker (3) - Willow Tit (2) - Treecreeper (4) - Nuthatch (3) - Oystercatcher (2) - Great Crested Grebe (4) - Sparrowhawk (2)
The 3 pair of Goldeneye that were here recently appear to have gone, plus no Sand Martin for me today after the 4 I picked up on Saturday. Plenty of Cettis Warbler heard plus Little Grebe and Water Rail but no sightings.
Posted by boatbirder at 19:08