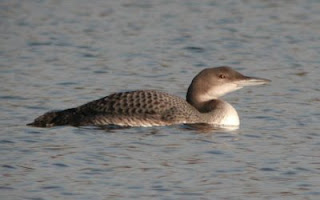 Once again myself and Alun, another Brandon Team Member, took time out to visit the nearby Draycote Water. Since our last visit on March 4th nothing seems to have changed on the web listings other than the addition of 2 Sand Martins. That didn't make us feel good as we are still awaiting our first Martin at Brandon. We also failed miserably to locate the Red Necked Grebe on our previous visit, which we knew beyond doubt was here somewhere, so that was obviously one of our tasks for today!!
Shortly after arrival and with a feeling of de' sha vue, we again bumped into Bob Hazell, Bob obviously spends as much time at Draycote as I do at Brandon, we immediately got the lowdown of what and where. Whilst chatting away Bob received more intelligence via a telephone call from Lee Johnson, in relation to a Merlin which he'd just seen flying across from Toft Bay, Lee runs the blog for Shustoke Reservoir, we met up with him a little later in the day.
After having coffee in the hide our list had already grown with the usual hits, including Green and Great Spotted Woodpecker, 30+ Wigeon, good numbers of Great Crested Grebe and a few Fieldfare, Redwing and Siskin still hanging around.
Walking along Toft Bank and still scanning for Merlin we picked up 4 male Goosander, always a pleasure to see. As we approached Farborough Spit, which is where Bob had earlier seen the Red Necked Grebe, we began our, what can only be described as, very determined search! Suffice to say that after much debate and several mirages we finally got a tick on the Red Necked Grebe, WooHoo!!
Shortly before lunch at Rainbow Corner we'd sighted several Meadow Pipit and a single Great Northern Diver (pictured), ending on up on the day with 3 in total. By the time we reached Lin Croft Point we'd had several more Goosander and for the second visit in succession a single Rock Pipit. The wind had picked up quite sharply by this time and so we completed the 5-mile round trip earlier than expected with the addition of Blackcap, Treecreeper and Reed Bunting. Our final species count for the day was 52, no Merlin or Sand Martin were on the list!
Napton Reservoir - On my way home I dropped in at Napton for a brief local sortie. The usual stuff was present but with only 1 Great Crested Grebe in sight. A walk down to the bottom reed bed came up with 2 Little Grebe calling, Sparrowhawk and I flushed what I'm listing as a Common Sandpiper, because it flew off so damn fast I had little chance of any further recognition! What was even more disappointing though is that a rather grand Oak, which normaly holds several Finches or Tits, had been brutally reduced to stumps by the ever thoughtful Environment Agency, who in my opinion continue to ruin this poorly managed site.
Still I'm cheered up by the call of our resident Tawny Owl who I can here through the boat hatch window as I write this post.
Posted by boatbirder at 17:25