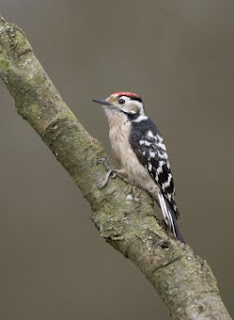 Thursday at Brandon is work party day and as always I arrived around 6 am to get some early birding in. Nothing unusual on arrival at Wright Hide, although I got some good views of a Kingfisher perched at Swallow Pool. The Cettis Warblers were calling well from Newlands, as they often do and I'm sure I caught a few brief notes of a Skylark in the distance.

Taking my normal route I arrived at the Carton Hide and picked up a couple of Little Grebes, now beginning to show their summer plumage and could clearly hear Water Rails deep within the reed bed to my right.

As mentioned in previous posts we still await the imminent arrival of Sand Martin and the first singing Chiffchaff, Redshank are also late to arrive this year with no sightings thus far!

En route to the work party meeting place several of the team members decided to take in Horsetail Glade in search of Lesser Spotted Woodpecker, which from several reports, we knew to be around. Having almost passed through the glade, picking up Treecreeper and Nuthatch on the way, we were suddenly aware of drumming from close by. Usually located by its call, and its drumming, which is somewhat faster than the Great Spotted, we knew immediately that we were in with a shout! After a frantic scan we were presented with some fantastic views of a pair, which were at tree top level. The male is distinguished from the female by his bright red crown and on this occasion it was clear to see that we'd located a pair. A quick phone call to another member of the team, who had been searching earlier alone, sent him scurrying to our location, the sighting was certainly the highlight of the day.
Having completed our tasks and had our de-brief over tea, myself and two other members of the team had another tour of the reserve in search of the imminent arrivals, but still no joy. We did however pick up a large flock, probably 100+, of Golden Plover a way off in the distance from the Main Hide plus several Buzzard, but having had the Lesser Spotted we left fully content with our days work, Dracote Water for me tomorrow!!
Posted by boatbirder at 18:26