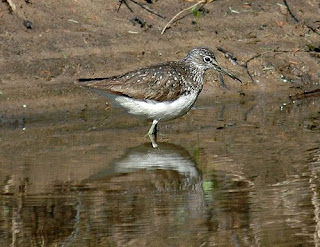 After being rudely woken at 5am by several Mallard feeding off the boat hull, sounds like a woodpecker drumming on metal, I decided to pay an impromptu visit to Brandon. Once I'm awake I'm awake!

I arrived just after 6am to the usual chorus of Song Thrush and made my way to the Wright Hide, a GS Woodpecker was drumming away in New Hare Covert and I'm positive I saw a Hare dart across the golf course. If indeed it was, this would be a rare and unusual siting for Brandon.

The East Marsh Pool delivered it's usual selection which included a single White Fronted Goose, normally in among the other Greylags but today on it's lonesome. Assuming of course it was the same bird often seen here! My count of Snipe on Willow Island yielded 28 in total, 4 Shelduck were present, 3 male and a single female and 2 Oystercatchers arrived a short time later onto Lapwing Island. At this point I had no counts of Goldeneye, in the knowledge that 3 pairs are currently on site, there was also a single Barnacle Goose on view. Before leaving the hide 2 Kingfisher flashed across into the bank to my right, followed by a single bird a few minutes later. On my walk around to the Carlton Hide several Siskin were feeding in the treetops and popping into the Teal Hide briefly I picked up another pair of Shelduck, making a total of 6 for the visit.

The Carton hide count was 2 Little Grebe, Water Rail, Sparrowhawk, another Kingfisher, which seem to have suddenly reappeared from the estuaries and rivers, and a Willow Tit feeding within the bramble, in addition I also located 2 more Snipe on the Island making it 30 for the day.
Arriving at the main hide and meeting up with a couple of the other Brandon team members we picked up a Common Gull amongst the usual Black Headed and hearing a Green Sandpiper calling from behind, popped back into Teal Hide to find him on the bund, my first this year. A later scan of East Marsh Pool also located all 6 Goldeneye I'd missed earlier. How did I manage that!!
In addition, plenty more Reed Bunting are now starting to appear, a quite striking bird but with a rather bland call and I also heard 7 Cettis Warbler, 2 of which I caught site of during my visit.
On the way home I came across a decent flock of Golden Plover at Birdingbury and arriving back to the marina around 11.30am for my Full-English was greeted with a singing Skylark and our regular Buzzards calling from the distance.
Not a bad haul considering it was an unplanned visit.
(Green Sandpiper Library Picture)
Posted by boatbirder at 11:41