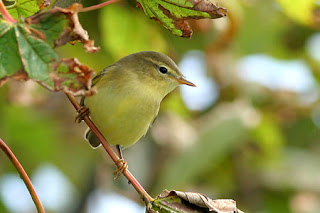 Last day of the month and a nice settled spell will see March go out like a lamb!
When I arrived at the reserve today, just prior to sunrise, a lovely mist had descended, giving it that real eerie fresh feeling. No JR to start with today but I did locate him a little later busy ringing in his usual spots.
A visit to the Wright Hide prior to meeting up had the usual numbers, a couple of Lesser Black Back Gulls, almost pure white from the front, suddenly appearing through the mist as the sun rose higher. After a quick scan I joined JR and his lovely assistant and helped with the weighing and ringing, before he finally decided to call it a day. It was good to see PB again back on the reserve, boy I've missed him, and it wasn't long before he came up with the goods! Flying high in an easterly direction he picked up, what we can only register as a Tern Species, possibly a Sandwich Tern, but far too high for recognition. We also picked up no less than 4 Sparrowhawks flying above, almost at the zenith.
During the course of our work today, various repairs around the reserve, we were lucky enough to pick up 2 Tawny Owls and a Mistle Thrush, two species which are firsts for me at Brandon this year.
After work we had lunch in the Main Hide and picked up with Monica & Tony, two well known photographers of the reserve, who showed us photographs of the Marsh Harrier seen on Sunday/Monday. The galling thing for me was that I learnt I'd literally just left the hide on Sunday when it appeared, bummer!
During lunch JR picked up on a single House Martin flying low over East Marsh Pool, which we all got site of, the first arrival this year. Strangely enough I only registered around 5 Sand Martin today, and no Swallows, despite good numbers from the last few visits. Finally today, the first Willow Warbler (pictured) was heard singing near New Hare Covert by a fellow birder. On the way back to the car park myself and PB had a walk down, JR had left a little earlier and had heard it, so it wasn't long before we picked it up. It was singing well, and we did get a brief glimpse as it flew from tree to tree, a nice end to a good day. We also observed a Muntjac Deer over near the Sand Martin Bank during lunch.
Back onto the canal system later as we set off for the Welford Arm on the Grand Union Canal, our three yearly bottom blacking is due. Always great to be back out, so lets see what we pick up.
Posted by boatbirder at 15:52