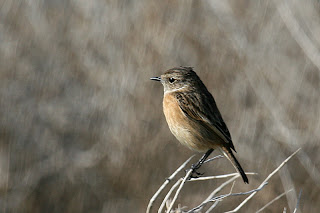 Having picked up Sand Martin and Chiffchaff over the last few days I was hoping that the spring arrivals would continue today at Brandon. Redshank is one particular species that should definitely be on site by now, but we still have no records for this year. Meeting up with Jim at around 6.45am it wasn't long before we picked up a singing Chiffchaff in New Hare Covert, as for Redshank we needn't worry any longer as a single bird had arrived and was feeding on Willow Island.
A further scan of East Marsh Pool revealed a huge count of 55 Snipe, plus 3 Shelduck and among the other usual suspects of Shoveler, Tufted and Canada we noted a couple of Lesser Black Back Gulls, which could possibly be a mating pair. A single female Pochard was also present with a few Gadwall and Greylag adding to the count. We also picked up 6 Great Crested Grebes at various spots within the reserve and the regular 2 Oystercatcher flew in around mid-morning.
At Brandon you can always hear Little Grebes and Water Rail calling from within the reed beds but toaday I was lucky enough to site 1 Water Rail and 4 Little Grebe, now looking dapper as they come into summer plumage. It's also good to see evidence that Nuthatch and Tree Creeper are once again nesting within the reserve.
Having split with Jim at lunch myself and Alan, another member of the conservation team, decided to take in the Carlton Hide, Horstail Glade, The Tip and Farm Field. At Carlton we got off to a good start with good views of Kingfisher but we drew a blank in Horstail for Lesser Spotted Woodpecker. The Tip threw up the usual regulars with Green and GS Woodpecker, Goldfinch, always feeding on the Teezle, Reed Bunting and the usual Finches and Tits. At farm field we had Kestrel and a quick scan of the fence posts came up with a lone female Stonechat, my first at Brandon this year. I also came across a dead Water Shrew, which had obviously fallen foul of a local Raptor and my bird species count for today was 59 which included Sand Martin, which I'd failed to detect on my previous visit.
Posted by boatbirder at 18:52