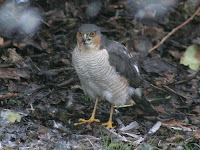 Another early start for me today arriving at Brandon at 6.25am. With the weather looking threatening for the early afternoon I though I'd start early and finish early, no point in getting soaked! No sign of the Barn Owls today but with the mornings getting lighter earlier I suppose I'm just arriving slightly too late.

My morning progressed taking my normal route with the usual Cetti's Warbler, Water Rail and Little Grebe calling from Newlands reed bed. On arrival at the Wright Hide I picked up the usual stuff plus a single Oystercatcher and 4 Shelduck. Pochard are now beginning to dwindle on the reserve and I only picked up a single on the East Marsh Pool. The 2 Goldeneye pairs which have been with us for a while are still on site but no sign of Ringed Plover and you may have expected by now the odd Redshank but again no sign.

The walk around to the Carlton Hide was uneventful apart from a single Coal Tit but a great view of no less than 5 Bullfinch in one tree, 3 female and 2 male was a site to behold and certainly brightened up the day. A couple of Buzzards were also seen across towards the River Avon and just prior to leaving a pair of Little Grebe appeared, now beginning to show distinct signs of summer plumage.

Having had my mid-morning coffee in the Main Hide I was just about to leave and join up with another member of the team to complete some bird box maintenance when the Bittern suddenly appeared in the reeds in front and took flight across to Newlands. I'm not a great believer in gloating but what the hey! I've now seen the Bittern on no less than 22 out of 24 visits to the reserve this year. However, my gloating was short lived when I fell arse over tit while carrying a ladder across to one of the boxes we were maintaining a short while later!! That will teach me.

Having completed our maintenance and had lunch in the Main Hide we had a quick walk across to 'The Tip' area in search of the Lesser Spotted Woodpecker which was picked up on Sunday. No sign I'm affraid to say but we did pick up 14 Redwing and a small flock of around 12 Goldfinch.
With the rain setting in and the wind picking up we decided to venture back to the Nature Centre Cafe for a milky coffee. Over coffee and unbelievably the highlight of the day was watching at close range, through the cafe window, the site of a Sparrowhawk chomping away on a Feral Pigeon which we think had flown into the window.

At the days end I'd heard a total of 6 Cetti's Warbler and 2 more Oystercatchers had dropped in to the East Marsh Pool. Also of note but not mentioned in my post were, 2 Nuthatch, 1 Treecreeper, 10 Snipe, 1 White Fronted Goose and a brief glimpse of a Water Rail as it disappeared into the reeds in front of the Main Hide. 2 Collared Dove over the Main Hide are also worth a mention as they are very rare to the reserve.
Posted by boatbirder at 15:15