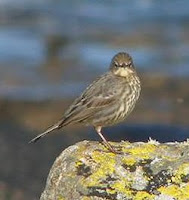 My birding week continued with a visit to Draycote Water, although quite local to me a site I haven't visited for around two years. Our main targets today, having visited the Draycote website were, Red Necked Grebe, Great Northern Diver, Glaucous Gull and Smew.
I eventually met up with Alun Lunn, another member of the Brandon Team at around 10.20am, having found his directions to the meet up point somewhat spurious, (it's a left Alun not straight on!!).

Upon arrival we began our visit at Toft Shallows, encountering a Green Woodpecker and 20+ Wigeon feeding on the bank as we made our way east towards the hide. On first impression there appeared to be a real shortage of wildfowl on view, probably due to last nights rain and strong winds, the reservoir depth looked quite high too. After a good scan of the locality we discovered a good amount of Great Crested Grebe skulking beneath the over hanging trees, plus a good count of Goldeneye, eventually coming across a striking looking male Smew, always a pleasure.

After a quick coffee we continued south towards Toft Bank noting a good few Little Grebe, Gadwall and Tufted duck. Having had a quick chat with a fellow birder we were made aware that the Red Necked Grebe had been seen earlier at Farborough Bank. Unfortunately, as we approached the bank a number of boats had set out scattering the birds in the immediate vicinity, probably taking the Red Necked with them.

Heading on passed the sailing club our numbers had increased picking up Greylag, plenty of Pied Wagtail and the ever present Robin. Our vigil for the Red Necked Grebe continued until eventually deciding to have lunch at Saddle Bank. I have to say that today's weather was beautiful despite the bitter wind. With the protection of the trees and the sun, now getting ever higher and more powerful, lunch on the bank was idyllic and also quite lucrative with Buzzard, Skylark, 12 Goosander and a Great Northern Diver. During lunch we met up with a chap called Bob Hazell who we discovered practically visits Draycote daily and picked up on his perspective of the site. He also made the comment that he'd never seen it so quiet for this time of the year.
Reluctantly, as by now I had stripped off several layers in the warm sunshine, we moved on. With Bob's input we were left with a slight dilemma of backtracking, as Bob believed the Red Necked Grebe had probably cut back across to Toft Bay, or continuing on and taking our chances. We continued on!

As we walked to the west of the reservoir towards the Valve Tower we got good views of the Goosander, 2 Great Northern Diver and also picked up ChiffChaff, Kestrel and an unexpected Rock Pipit.
By the time we'd completed our full circle, unfortunately without the illusive Red Necked Grebe, we'd had the usual Tits, Finches, Crows and Rooks plus Redwing and a nice male Blackcap.
Finally it was time to check out the Gull roost which had been growing ever larger as we progressed around. Plenty of Black Headed as you would imagine, Lesser Black Backed, Common and Herring but nothing out of the ordinary and certainly no Iceland or Glaucous. On the way back to the cars we picked up a number of House Sparrow! I'd forgotten what they look like.
A slow start to the day and hard work to begin with but extremely enjoyable and we did get 50% of our targets, a total of 45 species, including a few unexpected hits as well, plus the weather was extremely kind.
Posted by boatbirder at 18:31

A warm welcome to Aberdeenshire Scotland. Having lived aboard our traditional narrowboat for over 16 years we're now back on ‘terra firma’ living in the heart of Aberdeenshire Scotland. Admittedly It was a sad moment when Dazza and I stepped foot off ‘Quidditch’ our cherished home afloat for the very last time and although we still own her, it brings to a close a wonderful period of our lives cruising the canals of England & Wales. We enjoyed many precious & memorable moments, but we’re very excited about our move north. I hope you continue to enjoy this journal of our field trips & travels. So let the new chapter begin.