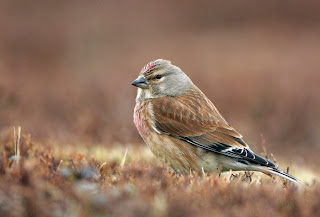 Over the past few days I've stayed local, plus my usual Thursday and Saturday visits to Brandon. Thursday is the conservation team's work party day and as always I arrived early for some birding. Unfortunately, the weather played it's part and the reserve was literally fogged in until around 10am when the fog lifted to produced a beautiful spring day. Chiffchaff, constantly singing from New Hare Covert, a White Fronted Goose, which flew over Swallow Pool while we were attacking the usual Willow invasion were the birds of the day, plus Sand Martin, which have now arrived in numbers. After the team's debrief I had a final scout around the reserve with Alan picking up a couple of Kingfishers at Carlton Hide.
Wigram's Turn - I'm delighted to see that the 2 Tree Sparrows at the marina have now grown to 12 and we now have a nice little colony flying around. I'm also convinced that I have a Long Eared Owl on my home patch, having heard it's booming hoot twice before dawn on consecutive mornings. Time will tell as I go on a mission to locate him, or her! Reed Buntings are now quite common within the marina grounds, as are Pied Wagtail which are always knocking around, Yellowhammer singing from the tree tops are also an occasional treat. Our Buzzard population stands at 4 definite's and are both possibly breeding pairs, I'm just waiting now for our first Willow Warbler to arrive on site.
Napton Reservior - I paid a quick visit on Friday evening but as usual I was somewhat disappointed. The highlights being a single Chiffchaff, pair of GC Grebe and a couple of Little Grebe calling from the reed bed, perhaps one day Napton will surprise me.
Despite promising much today Brandon produced nothing out of the ordinary however, I did pick up a couple of Linnet on Sheepfield, which are a year-list first. One extreme positive though was the site of several Sand Martins paying particular attention to our artificial nesting bank, 2 birds actually flew in to investigate which is extremely encouraging.
Posted by boatbirder at 17:47