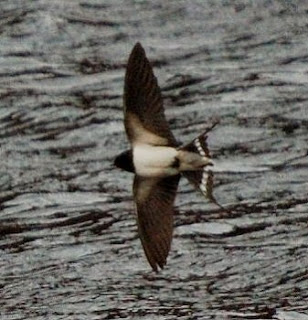 Monday 23/03/09 - A triple entry today as I just haven't found the time to update on a daily basis. I spent the whole morning at a very windy Brandon, leaving at around 1pm just prior to the rain setting in. As usual I had a good count of Snipe, around 40+, still amazing for this time of year. I also had a wander onto Sheepfield, being very careful to stay well away from one of our Owl boxes. I spend approximately 20 minutes on the ridge in the hope of Stonechat, or even more optimistically, Northern Wheater, I got neither but I was certain I heard the calls of Meadow Pipit which used to be a regular nesting bird here.
Although the wind isn't great for scouting the wooded and open areas of the reserve, theres always the possibility of it bringing in more unusual visitors, especially on the pools and in particular viewed from the comfort of the hides. On this occasion 5 Pochard dropped in, 2 striking males and 3 female, a not so regular visitor for this time of year and shortly after a couple of female Ruddy Duck. Also on the day, as well as the regular visitors I picked up 2 Ringed Plover and 4 Oystercatcher, ending up with a total species count of 58.

Tuesday 24/03/09 - My usual all day stint and I have to say that despite the forecast the weather was excellent. Meeting up with Jim around 6.45am we had a much more in depth look at Sheepfield and hit on Snipe, plus 3 Meadow Pipit, which confirmed my suspicion having heard them calling yesterday. Moving on to the Wright Hide our first good scan revealed nothing unusual. Jim left the hide around 8am for a short while to meet a friend during which time I picked up on a Little Ringed Plover flying in low onto Willow Island. Unfortunately, by the time we'd met up again at the Main Hide 20 minutes later the little fellow had departed. I can tell you that I took a good ribbing for the remainder of the day from other team members about my imaginary Plover! Shame the latin name for Little Ringed Plover is Charadrius dubius!
Later in the day we had a not so regular visitor to the reserve, a sudden uplift of Gulls and Lapwing from Willow Island usual means a glance upward and this time it produced a Curlew, which after a quick tour of East Marsh Pool soon settled. Today produced good numbers of Sand Martin, whom I'm forever scanning in search of the first Swallow or House Martin of the year. At one time we also had 5 Common Buzzard in view from the Carlton Hide, a bird which less than a decade ago would have been a great spot at Brandon. The usual Cettis Warbler, Water Rails and Little Grebes were also evident, as were Chiffchaff, which you can now hear singing all over the reserve.

Thursday 24/03/09 - Thursday as ever is work party day at Brandon and as usual I arrived early in anticipation of picking up something different. Our early tour of the reserve drew a blank with the exception of Derek, who for the second Thursday in a row had picked up on the Lesser Spotted Woodpecker in Horstail Glade. Note to self! Follow Derek everywhere!! Over lunch in the Main Hide we picked up on 2 Ringed Plover and the first early Barn Swallow swooping low over Willow Island.
After work had finished myself and 2 other members of the team, including Derek, had a final tour of the reserve and picked up 2 additional Barn Swallows and a Grey Wagtail, which was bobbing around on the south raft, no Lesser Spotted Woodpecker though!
Posted by boatbirder at 20:04