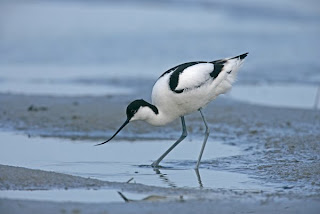 I hadn't intended to update my blog today but after the visit of a bird which has only graced Brandon on two separate occasions since August 1990, It was obvious that I had to record this historic event.

I was actually slightly later than normal arriving at Brandon Marsh today, appearing just after 7am, but immediately after entering the lower car park I received a phone call from Paul Norman, who was ringing down by the Olive Wood Bench with Jim Rushforth. An Avocet had dropped on to East Marsh Pool and was showing well! The last time an Avocet decided to visit Brandon, strangely enough during the same week last year, it only stayed for a short period and so the rush was on.

I drove straight down to the Saga sign which overlooks Goose Pool and made a quick dash for the Balwin Hide. Fortunately today I'd brought my spanking new video camera and hastily made a grab for it before I set off. Turns out that I needn't have tried to induce a near heart attack, as the bird was still on site feeding happily at 4pm when I left. I recorded some excellent video of the bird and some stills, well I think I recorded some good video as I haven't played it back as yet but time will tell!

An excellent day all round with some other good personal sightings to mention, a Grasshopper Warbler calling from the Goose Pool reed bed, and a second heard calling from Swallow Pool reed bed by Jim and Paul earlier in the morning.

Settling back down to my normal routine after all the excitement, I began with a Whitethroat at Sheep Field, a Raven over Newlands, and a amazing 6 Little Ringed Plover later in the afternoon, plus 2 Ringed Plover and 3 Redshank were also recorded on East Marsh Pool. Newlands produced a further 2 Sedge Warbler with the usual numbers of Chiffchaff, Blackcap and Willow Warbler, what a cracking day!
Posted by boatbirder at 19:04