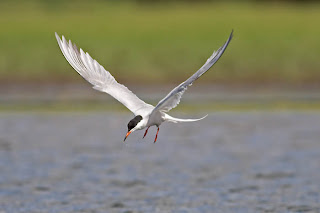 Well it seems an absolute certainty now that my planned trip to Spain on Tuesday for several days birding is a non starter, disappointing of course but I'm just grateful that I'm not stuck out in some far away airport with no way home! With the volcano still in full flow and no foreseeable change to the current weather patterns I'm even doubting that my next trip in May will take place.

My usual Sunday morning trip to Brandon today and a surprise too as the Avocet, which was on site Thursday and Friday, has unexpectedly reappeared. The bird doesn't seem to be able to decide whether to feed on Teal Pool, River Pool or East Marsh Pool at present and can be seen flitting to all three. The Cuckoo which appeared yesterday morning over East Marsh was calling earlier today from the back of Newlands reed bed, visible with a scope in one of the tall trees.

Jim, who arrived earlier than anyone today, reported a Grasshopper Warbler reeling from the West Marsh reed bed, and a delight to us all at around 9.40am was the return of a single Common Tern (pictured), which flew around East Marsh Pool for a few minutes before moving off West. By the end of the week I predict that we'll have several more of these delightful birds on site. Also on the main pool early on was a lone Green Sandpiper, a species which I suddenly realised I hadn't yet seen on site this year, and so another site year tick.

After a tour of the remainder of the reserve a couple of fellow birders mentioned the first goslings of the year, with 5 Greylag on the golf course. An excellent species count today too with 61, you'd be really hard pushed to go anywhere in the midlands where you'll come up with such an excellent haul, well done Brandon!
Posted by boatbirder at 13:04