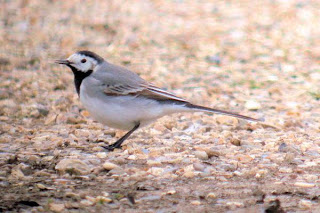 With the winds now changing to north or north easterly the recent early influx of migrants to Brandon Marsh has slowed significantly. The early Whitethroats I picked up on Saturday and Sunday appear to have moved on, and you really have to work hard to pick up on any Sedge Warblers on site, although I did manage 2 today, eventually! Having said that 2 early Hobbies recorded in the region at Marsh Lane today are an interesting record, and have certainly put me on early alert at Brandon!

I'm glad to report that I finally picked up my first House Martin of the year during Sunday's visit, and actually had another on site today. One other species that's been high on my hit list at Brandon recently has been Lesser Spotted Woodpecker and I was beginning to wonder if I'd pick one up at all this spring, with the tree canopy quickly coming into bloom, time was certainly running out. A glut of sightings over the previous week has prompted me to spend more time in Horsetail Glade than I would normally do, but today I'm glad to report it finally paid off, with an albeit short but superb view of a male bird on one of the many Silver Birch. My thanks to JR for the initial find and who actually has both male and female recorded for today!

Another first for me this year at Brandon, and a rare visitor to the site too, was a White Wagtail which dropped in later in the day on East Marsh Pool, a very pristine example it was too of this European species.

Other nature notes today consist of the Butterfly population now beginning to flourish with more sightings of Comma, Brimstone, male Orange Tip, Small Tortoiseshell and circa 20 Peacock. Bumblebees are also well in evidence with many Buff-tailed and a good few Red-tailed around today too. Flowers such as Lesser Celandine, Violet, Primrose and Marsh Marigold are also starting to show well and another first for me today was the sight of a pair of mating Common Buzzard, now wouldn't that be something to have, a breeding pair at Brandon.
Posted by boatbirder at 18:42