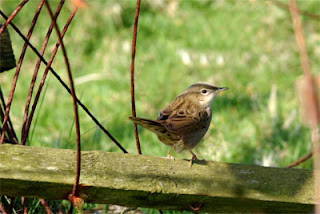 Two visits to Brandon Marsh over the weekend, which produced a first for me on the reserve, plus a nice walk on the local patch this afternoon ended a very fruitful weekend.

At Brandon there seems to have been a good influx of Grasshopper Warbler (pictured) recently with at least four birds reeling from various areas across the reserve, a great improvement on last year when only two birds were recorded. After the first Swift appeared on site Thursday morning, followed by more over the weekend, the only remaining regular summer visit left to arrive and be seen is the Hobby, unfortunately no sign of any thus far but high hopes for the coming week. Keep an eye and ear out too for other possible spring passage visitors seen over recent years but absent thus far. Wood Warbler, Whimbrel, Garganey, Greenshank, Dunlin and Osprey if your extremely lucky, plus Spotted Flycatcher, 2009 being a great year on site for this species, but it's a little early so plenty of time yet!

A first for me at Brandon after 18 months at the reserve was a female Wheatear which we eventually discovered, after a text message to JR, just over the bank at the coach parking area, a species that was fast becoming a bogey bird for me, with only one on site the whole of last year, and missing out on last Monday's visitor!

Another Yellow Wagtail over the weekend on Wigeon Bank and the Lesser Whitethroat, which I had good views of on Saturday, can still be heard singing near the Sheep Field gate. Also worth a mention, if your on route from the Big Hide to Carlton Hide, is a Garden Warbler which I've heard singing twice this weekend on the path down.

After Brandon today a nice afternoon walk with the wife around Napton Reservoir and the footpaths around Ventnor Marina. Always good to get out locally and a pleasant surprise too were the several Skylark singing in various locations. Yellowhammer, Whitethroat, Blackcap, Willow Warbler and Chiffchaff are all in evidence around the locality as you'd expect, and a Cuckoo calling from across Napton Hill was Dee's first of the year. A number of Butterflies out today too with Orange Tip, Small White, Small Tortoiseshell, Peacock and our first Painted Lady of the year, although not in pristine condition.

The Reservoir was busy with fisherman but Cettis, Reed and Sedge Warbler were all on site within the reed bed, plus Pied Wagtail, followed by a lone Yellow Wagtail which dropped in briefly before departing West. A bit of a surprise at the marina when we arrived back was a late staying Fieldfare which flew off noisily as we walked down the west path back to our mooring.
Posted by boatbirder at 18:08