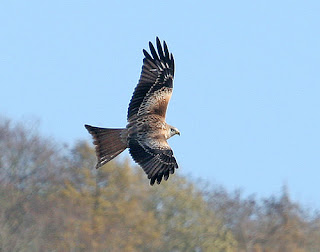 After the Easter break it was nice to get back to Brandon Marsh this morning for a good days birding. With the conservation team suspending work on the new phase 3 reed bed project to allow for breeding birds, it meant a welcome return to our Tuesday birding day, something I've dearly missed. Being the most exciting time of the year on any birders calendar, you simply don't want to miss a thing, anything can drop in at any time!

Firstly though I have to mention quite a worrying and bizarre situation reported to JR and myself which took place yesterday evening at around 7.30pm, when it appears some stupid individual actually waded out in jeans and t-shirt to one of the Islands on East Marsh Pool and stole a Canada Goose egg. This very brave lady, who relayed the story to us this morning, confronted this young idiot and managed to get the stupid individual to replace the egg before extracting him from the reserve, and more importantly gaining photographic evidence, something we can act on!

Back to the birding and after locating my first singing Blackcap at Brandon on Saturday it wasn't long before I'd registered a few more today, they've certainly now arrived in good numbers. There's now plenty of nest building activity in progress too with the discovery of more Long Tailed Tit nests, newly drilled Woodpecker holes and many Sand Martins moving in and out of the artificial structure. A Yellow Wagtail was also reported to us as being seen close to the wind pump mid morning.

A Lesser Spotted Woodpecker was also reported on JW's site, The Unofficial Guide yesterday, but having read the sightings book in reception, it appears the bird was only heard, so no concrete sightings of a bird on site yet. Many Buzzards and a few Sparrowhawks were observed today enjoying the thermals, but while taking an afternoon walk across the 'Tip' area a very pleasant alternative as a Red Kite (pictured) appeared over West Marsh and gave good views before rising high and heading south-east, the first record of this superb raptor this year.

The usual waders were observed on East Marsh with many Snipe, 2 LR Plover, 2 Ringed Plover, 2 Redshank and 2 Oystercatcher and while completing a short survey on the Sheep Field area, 5 Meadow Pipit flew over. The second reported Sedge Warbler on site this spring was also heard on West Marsh from the Steetley Hide and a couple of Butterfly species, too distant to ID were also seen.
Posted by boatbirder at 17:34