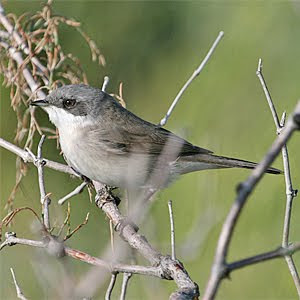 At last the Sedge Warblers have finally reached the marina, at least two singing this morning as I left for Brandon in a chilly -3C. Other local news is the discovery of a Ravens nest not far from my location, after noticing aerial acrobatics on several occasions I finally managed to locate the nesting pair this evening. Great news too as I can actually watch the birds coming and going with the aid of my scope from my current mooring.
Spent most of the day down at Brandon Marsh with the conservation team replacing the screens at Baldwin hide, arriving at the crack of dawn for a few hours intense birding beforehand. The usual trek around to the Sheep Field gate, where I spent an enjoyable 20 minutes observing more Whitethroat arrivals and listening to the usual cacophony of other warblers, the odd Linnet, and a Lesser Whitethroat which I heard singing briefly.
Four Grasshopper Warblers reported from around the reserve today by the team, personally I managed two, one of which I was able to observe perched low in a Hawthorn. East Marsh Pool produced the usual waders, including Common Sandpiper, and this morning a brief visit from a Yellow Wagtail on Tern Island. As we passed the Saga sign near Goose Pool the first Swift of the year flew east high above the Poplar trees, I managed a second later in the morning.
A couple of Redshank on Teal Pool and as we approached the Carlton Hide a Cuckoo could be heard but very distant. A much closer one, probably the same bird, called several times while we completed the Baldwin Hide repairs. The first Reed Warbler of the year was also heard singing on site today too and I managed to pick him up while standing at the Olive Wood Seat around mid-morning. I was also lucky enough to get a good view of a Tawny Owl, the first I've seen at Brandon for a good while.
Above : Library picture of Lesser Whitethroat
Posted by boatbirder at 19:31