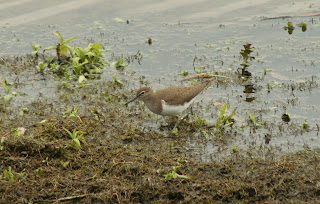 Well I suppose it was inevitable that my 6.30am flight to Spain, for what I hoped would be several days birding, was finally cancelled at 9pm last night. With my cancelled flight the only other alternative was to get down to Brandon for an early start and a good days UK birding before the depression set in!

Before I get down to business I'd like to confirm that the individual pictured in my earlier post 'Help Wanted' was caught red handed by yours truly as I left Brandon yesterday afternoon, bunking in over a fence on Brandon Lane. Without going into too much detail my hope is that we can now draw a line under the incident and let things take there natural course! Thank you to those who responded with information.

At Sheep Field gate there was a marked increase in singing birds this morning with 4 Whitethroat and 2 Linnet being the best of the bunch, but today also saw more spring arrivals, firstly with my first Lesser Whitethroat, heard singing around the Sheep Field area at around 7.15am. Moving on past Newlands where a couple of Sedge Warbler were singing, a pretty quiet East Marsh Pool early on for any new arrivals, with the exception of a Common Sandpiper, which I did manage to pick up yesterday during a brief afternoon visit. Kudos to Jim who yesterday morning had Wheatear and Yellow Wagtail on the Islands, Wheatear being a very rare visitor to Brandon with only 1 sighting during the whole of last year.

Arriving at the big hide a short while later some excellent views of another first arrival for me this spring in the shape of a Garden Warbler, which we watched singing in the Hawthorn on the path down to Carlton. Mid morning a Common Tern arrived looking slightly exhausted and spent the rest of the day resting on the Island and goal posts, it was still there when I left at 3pm.

More House Martins than previously seen today but unfortunately no Swifts which was a bird on today's hit list as an early arrival. The Cuckoo which graced us last weekend appears to have moved through, unusual as they tend to hang around once they arrive at Brandon, and no sign of the recent Avocet.

2 Common Sandpiper today, one of which I manged to snap quickly yesterday, also seen on site were Ringed Plover, Redshank and Water Rail, plus much more evidence of nest building and birds sitting, including Little Ringed Plover of which there were 5. A slight surprise today too were 2 Lesser Redpoll which flew over near Newlands early on, honestly Jim myself and Peter are 100% confident!!
Posted by boatbirder at 16:18