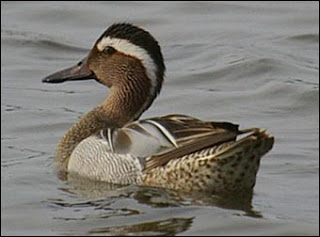 Well I enjoyed my lay-in this morning rising about 6.30am, before departing for Draycote Water to meet up with a few of the Brandon Conservation Team members. On arrival at 7.30am we were greeted by an almost flat calm water as we walked down from Thurlaston village, noting House Sparrow and Swallow on route.

As we reached the gate into Draycote a Blackcap singing was the first birding record of the day, closely followed by Willow Warbler. The walk around Toft Shallows surprisingly produced very little, and in fact the only birds of note until reaching Farnborough Bank were the usual Great Crested Grebe, a small flock of Goldfinch, containing a single Linnet, several Pied Wagtails, Green Woodpecker and a singing Lesser Whitethroat. As we approached the Bank things picked up quite rapidly with Common Tern, 3 Yellow Wagtail, 2 in flight and a pristine male on the grass bank, 3 Wheatear, 2 female and 1 male, and just prior to moving on we managed distant views of Great Northern Diver.

Site knowledge is always a bonus and as we met up with Bob Hazell, a very regular Draycote birder, it wasn't long before we were looking at an extremely attractive male Garganey (pictured), which had flown in as we approached. Bob also mentioned a Common Sandpiper nearby which we never managed to pick up on, but did have a Little Ringed Plover near the fishing pontoons.

After a brief rain shower we stopped at the picnic area for morning coffee and were joined by two more members of the conservation team. Just prior to moving on we suddenly located 2 male Garganey near Rainbow Corner, plus a single Shelduck out in mid-water. Great views of one of the Garganey as we arrived at the corner, the second seemed to have flown off, and as we walked from the Inlet up to the Valve Tower we recorded Garden Warbler, Yellowhammer, more Lesser Whitethroat and our 3rd Common Tern of the day.

By the time we turned the corner at the Valve Tower the wind had increased considerably and as we met up with Bob once more a Grey Wagtail dropped down right in front of us. After a catch up and a farewell to Bob we continued on and stopped for a wind swept lunch near Dunns Bay, here we had excellent views of one of the Great Northern Diver not too far out. A good days birding but a slight disappointed with no sign of the Little Gulls or Black Terns recently reported.
Other birds of note today included : Buzzard, Sparrowhawk, Kestrel, Skylark, Sedge Warbler, Chiffchaff, Common Whitethroat, Swift, House Martin, Shoveler, Gadwall and Little Grebe.

If your unfamiliar with Draycote Water below are a couple of good links to the site.
Draycote Birding Website Google Map of Draycote Water
Posted by boatbirder at 14:30